My north travels from Delhi to Jodhpur, moved eastwards to Uttar Pradesh and Bihar. These are two states in the country, which have a history of giving our country, the most famous of leaders, the maximum number of scholars, high profile government officers and some great insititutions, but these are also the states with the most backward of societies, huge social issues and large amount of illiteracy and poverty.
My first stop was Varanasi ( Benaras ), the abode of Lord Shiva, and the most important religious center of India. 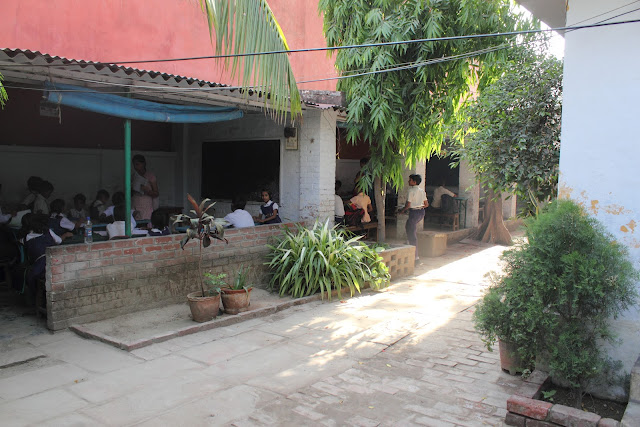 I visited the Naveen Nursery & Primary School, a initiative of Wider Vision Foundation. This school was set up in 1976, by parents of Neel Pratap, who wanted to give back to the community they had lived in after retiring from their professional jobs. Now, Neel Pratap alongwith his wife, Birgit Pratap, manage the school and are also the founders of Wider Vision Foundation. 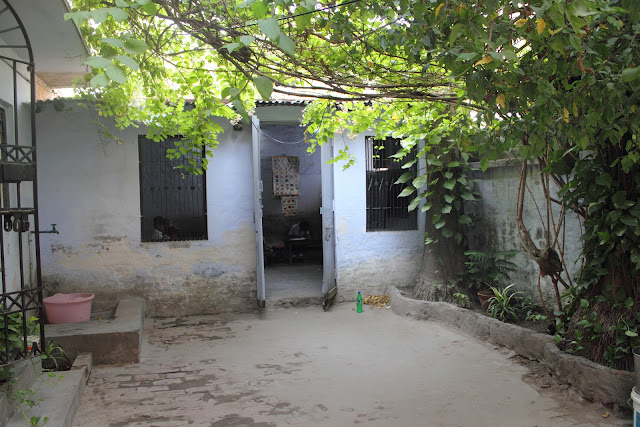 The school has classes from Nursery to the 5th Grade, and all the classes are very beautifully built around their family home. It’s a perfect example of a courtyard school. I will call it the “modern day gurukul”
To maintain quality, each class has not more than 25 children and the medium of instruction is Hindi.
A normal school day starts at 7.30am in the summers and finishes by 11.00 am, and at around 8.30am in the winters and is over by 12.00pm.  The school assembles in the little backyard for an assembly, where both an English and Hindi prayer is read out, and the children finish with a beautiful old Hindi prayer – “hum ko mann ki shakti dena” 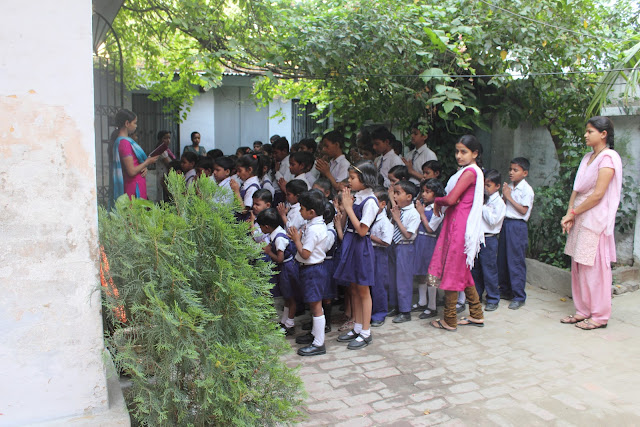 I stayed at the school for 3 days, and interacted with the children in each class, as well as conducted workshops with them and the teachers also. This was the beginning of the Tara Trust Teachers Training Program, which we shall be working on and formalizing in the next couple of months.
25th April 2012, was the first day and I spent time observing the classes and spent some time helping the nursery class teacher with the children. They were absolutely adorable kids, and some very sharp in grasping their lessons.
On 26th of April, I conducted the T-shirt painting workshops, as a part of the 1000 crane project. We are in the process of completing the 1000 T-shirt mark, and want to try and include as many children from different parts of the country as possible. The workshop began with me sharing the story of Sadako Sasaki, telling the children about the hazards of nuclear power, and also the need to be sensitive to the environment to prevent natural disasters like tsumani and earthquakes. I worked with the children of the 4th and 5th grade at the school. 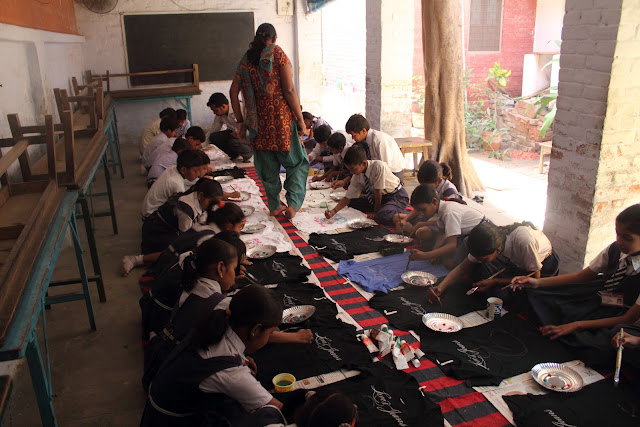 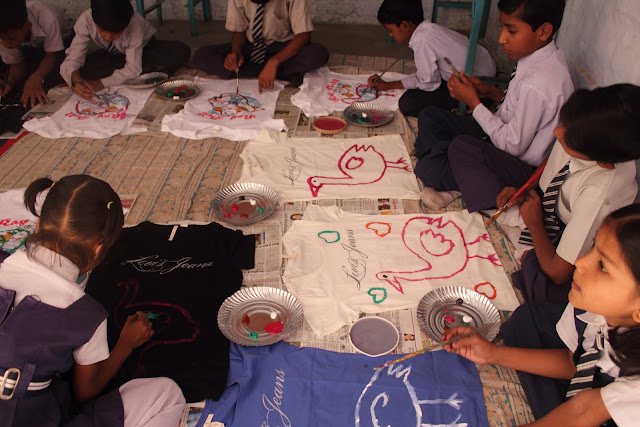 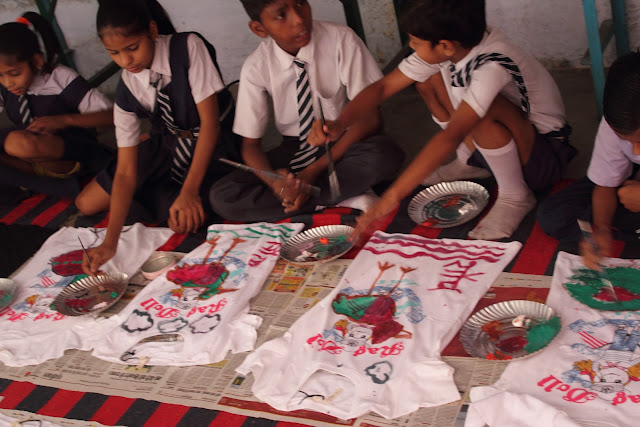 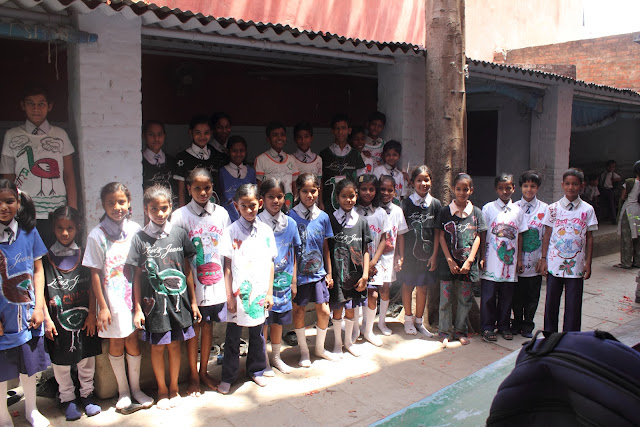 On the 27th of April, I conducted team building, listening and visualization exercises with the students of 2nd and 3rd grade, individually. 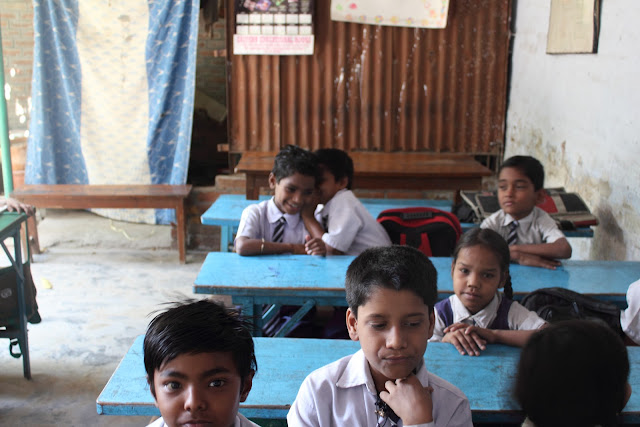 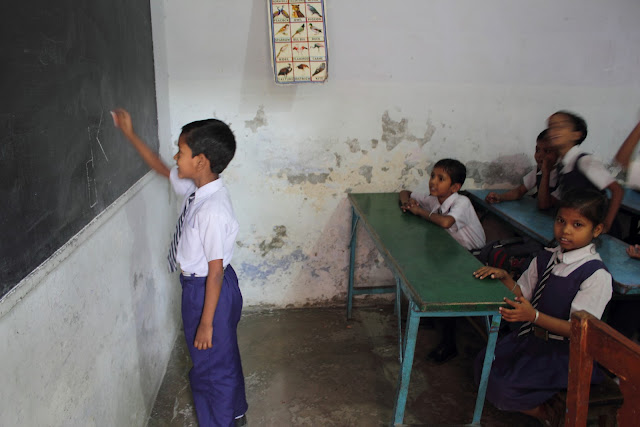 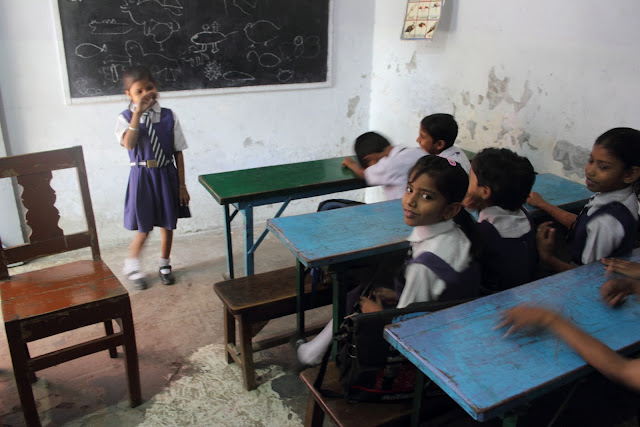 The energy, enthusiasm and the interest in working hard at the workshops by the children showed me that they were happy and encouraged doing activities apart from academics and in turn I did see some of them gain from the experience.
On my last day, I conducted a workshop with the teachers of the school after school hours. There are in all 8 teachers in the school. Having observed them for the last 3 days, I decided that they needed to have fun and learn to be a little care free. The workshop was called – “Spontaneous Creative Fun” 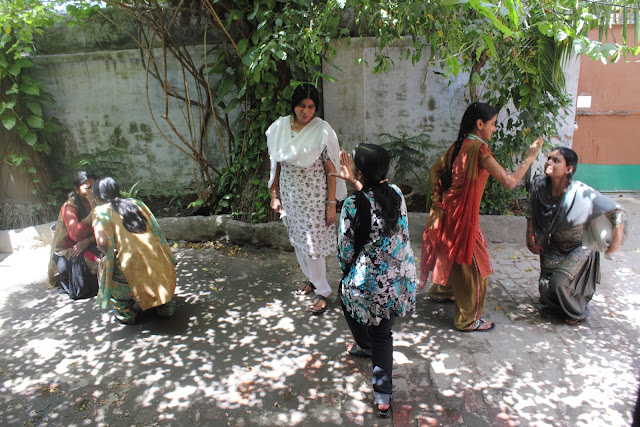 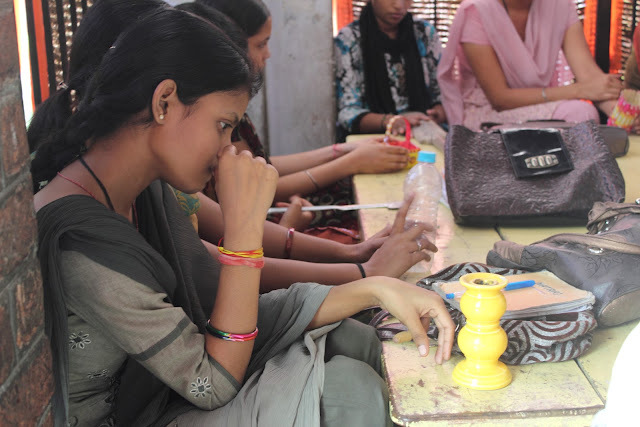 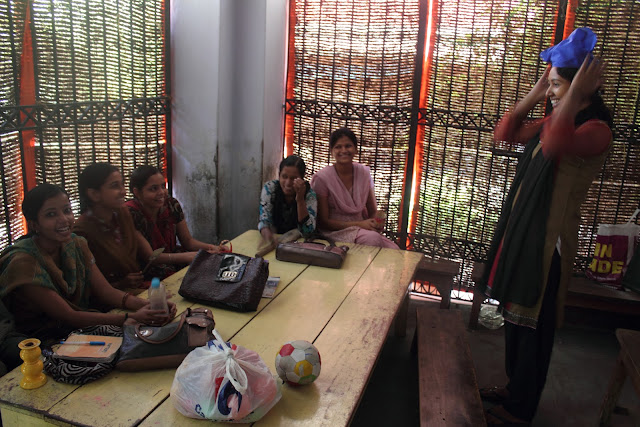 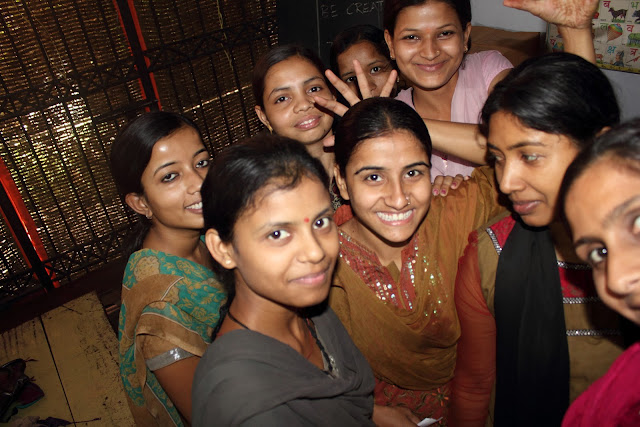 We went thru a series of 3 exercises in one hour, which helped them think quick and react quicker. Then allow their imagination to run wild and in the last exercise, try to have pure clean fun by playing a children’s game. We concluded the workshop with a feedback session, and the best feedback received was “ we have never done anything like this before, we were scared in the beginning but now we want more !!!”
Naveen Nursery & Primary School, is a very honest and sincere endeavor from the family and the team of teachers, and is a very good example to show that all we need to do is follow the motto “Each One, Teach One” 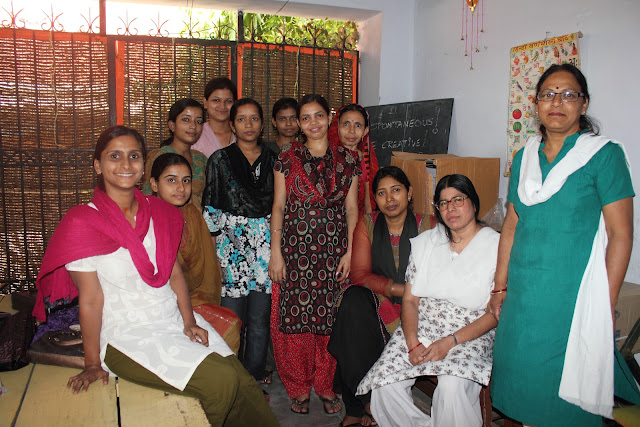 I then travelled from Varanasi to Bodh Gaya, to the visit the Tara Children’s Project, an initiative of The Root Institute in Bodh Gaya. This is a very new project, set up by the institute in 2009, and is a home for children affected by HIV/AIDS. 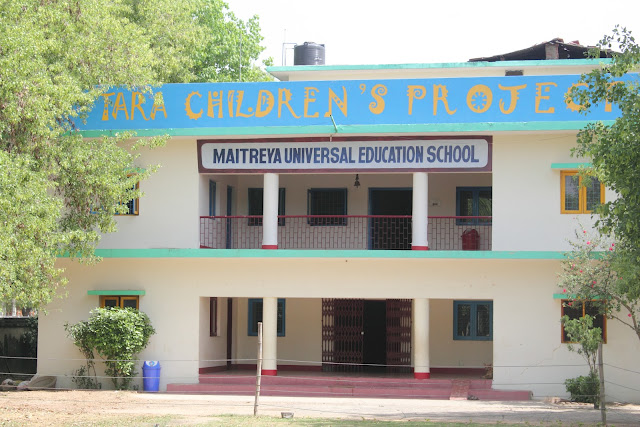 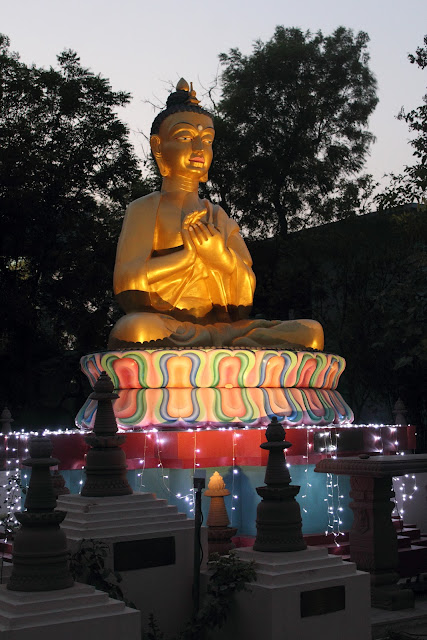 Due to lack of time, I could not stay there for more than 2 days but it was sufficient for me to understand and know that for sure, we all at Tara Trust are going to support these lovely children.
There are only 13 children right now in the home, the youngest is 2 ½ years and the oldest about 14 years. Some of their stories are heart-rendering, but, in all it is a very beautiful project.
The Root Institute is a semi monastic Buddhist center, which also runs a full-fledged charity hospital, as well as various Buddhist Programs. So under an umbrella of a beautiful monastic center, the children have a clean and healthy home that they live in. They go to a nearby private school and are under the constant care and medication of the hospital.
I reached on the 29th morning, and it was a Sunday, their day off, but, they seemed quite excited to see me, as they were able to communicate with me in Hindi. There are lovely volunteers working at the Institute but most of them are foreigners, so there is a huge language barrier between the children and them. Since, I did not want them to work too hard on their day off, we just conducted an introduction game and I tried to teach them the SIM GEM GEM song from Africa which all our Tara children in Goa know, and they were quite amused. 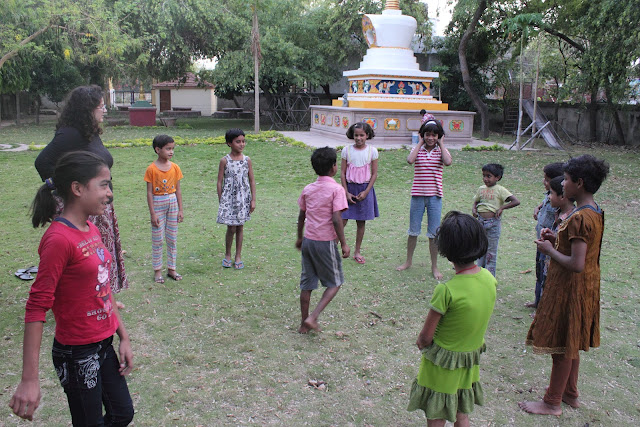 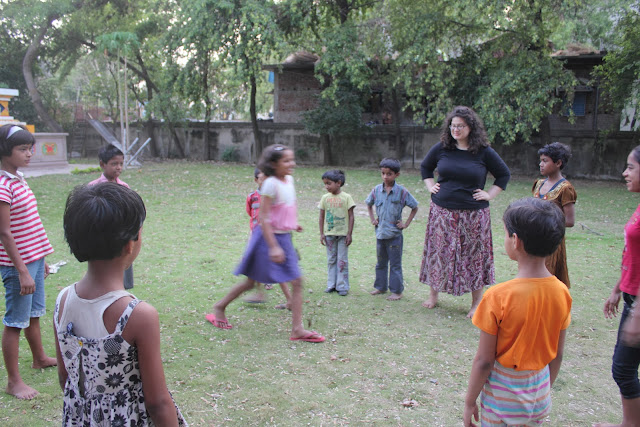 Then, in the afternoon session, we played the game of Pictionary, as once again I wanted to challenge the children to think, visualize and articulate without using spoken words. It was quite fun, and then we ended the day with a short game.
The next day – 30th April, being a Monday, the children all went to school, but, I got to meet the management of the Maitreya School, which is in the premises of the home as well. Maitreya School is also a charity school run by the institute for the children from around the villages. It was shut for a couple of years and now re-opened on the 15th of April, 2012. They only have classes UKG, LKG and 1st Grade, and plan to add on one class a year. 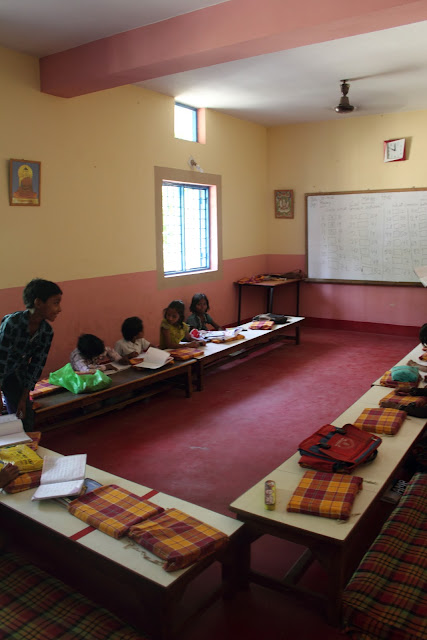 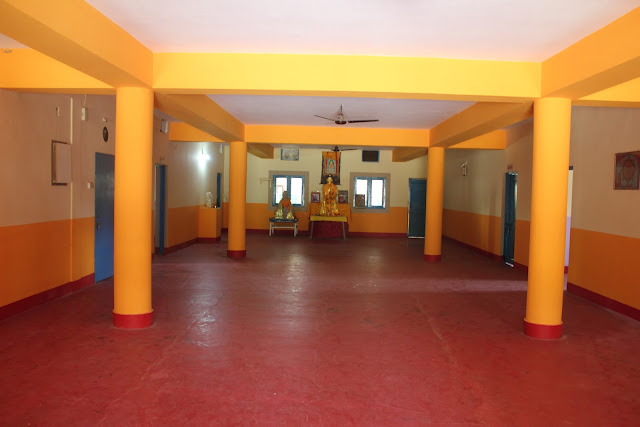 Once the children were back from school, post lunch, we began working once again. I did a short story telling session, “Daddu Chala Duniya Dekhne” (Daddu travels to see the world), it’s a story about a frog who leaves his home without informing anyone to see what the world outside looks like and how he realizes the worth of his home, and returns. So, thru this story, I wanted the children to understand the importance of their home and learn to listen to their elders, in their case the care-givers of the home and their teachers.
After the story telling session, I taught them how to make paper frog thru origami. To my surprise, the youngest in the group learnt it very quick and became my assistant to teach the others. 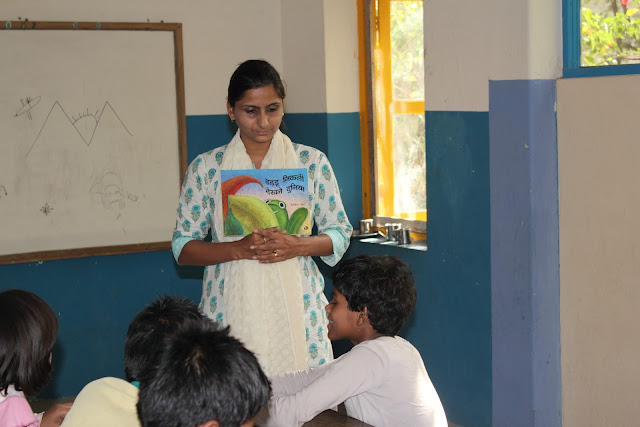 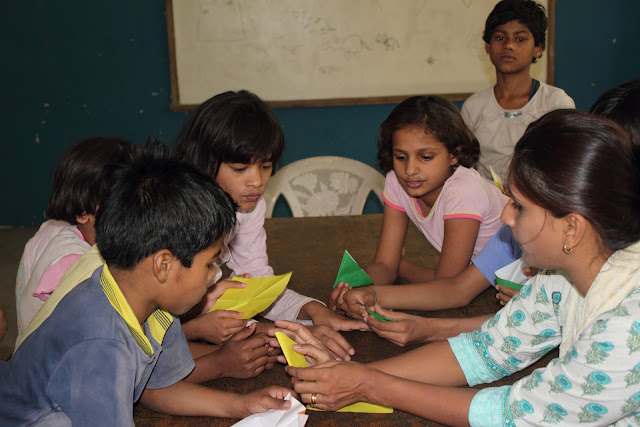 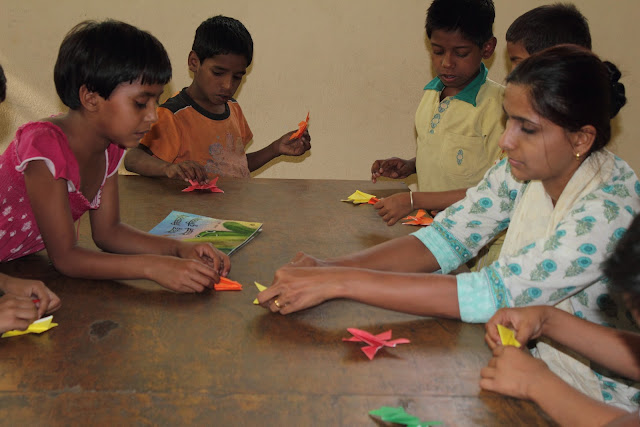 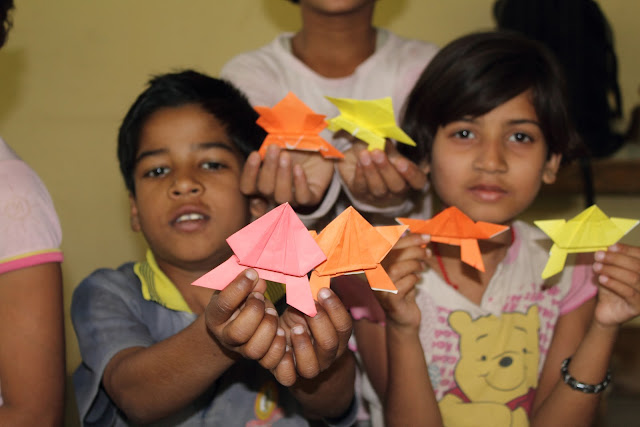 The Tara Children’s Project, is a great initiative in a state like Bihar, which has a huge problem with HIV/AIDS and also a lot of social stigma attached to the disease, and the section of society that suffer the most due to this are innocent children and women.
My trip to Uttar Pradesh and Bihar was a good way of understanding the culture and social issues of North India. Also, the set-up of Naveen Nursery & Primary School, in Varanasi, was a great example for a small effective and honest educational center, and visiting the Root Institute and Tara Children’s Project, revealed that there are social stigmas still attached to various diseases and illness like in the past which need to be eradicated to the upliftment of society as a whole, and there are still large number of rural pockets in India that awareness in health and education has still to reach.
The 1000 Crane Project is growing its wings, and we are now, looking at building bridges with schools/institutions/homes for children in other parts of the country, who need or would like to collaborate with us, Tara Trust, helping one another help our children to grow and work towards an overall development.
Posted by Juhi Pandey at 5/16/2012 09:08:00 pm

Juhi Pandey
An alumni of NID Ahmedabad - Textile Design (99-2002) and NIFT, Chennai - Fashion Design (96-99) I have17 years of work experience, starting in the mainstream garment export sector for almost 8 years, post which I moved on to working in the social development space. I have worked and facilitated various agencies in the area of fair-trade, skill development and education. I helped set up, Tara Trust, an organization for children and women in Goa between 2011-2015 concentrating on creative learning methods for wholistic development. I moved to Kachchh Gujarat in 2016, to work with a 10 year organization on a systematic growth plan for transforming the crafts sector through innovation and design into a creative craft industry for better linkages and promotion, with the key belief in entrepreneurship to be the main driver for development in the craft sector. My true passion is education, as I believes, it is the single most strongest tool for any meaningful change to happen in the society especially the for the less privileged or backward communities. When I am not working, I love theater and travel and hope to use these two tools in the future to educate the young minds of tomorrow.