We are all One Family!

This was the topic of my post even when I wrote about the last day at the New Delhi workshop, but, I cannot think of a more apt heading!
Today, I had invited a group from The Wall Project (http://www.facebook.com/groups/9822921861/ ) as I wanted to the kids to meet with them to understand their concept of beautification and also team work. 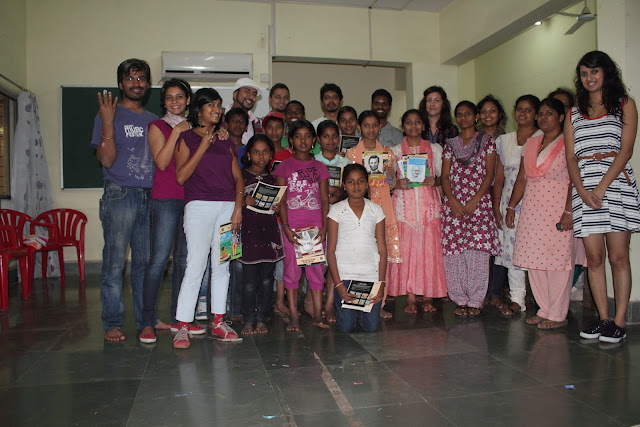 Chaitanya, Nitya, Vinay, Dhanya, Nisha and Carl – all are very talented and creative designers in their own fields and I was very happy to see them all come enthusiastically on a Sunday morning to work with us.
The task was huge, since as we were looking at working on a 1.5 mt X 5 mt canvas, which was going to be eventually presented to the Khula Asaman project of TISS, as our token of gratitude for the co-operating with us, and making this project possible in Mumbai. 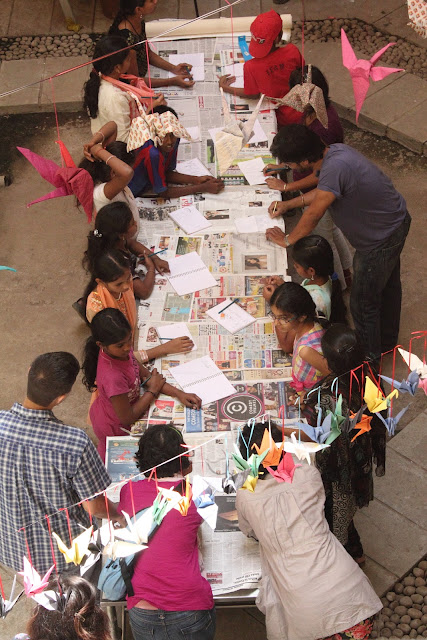 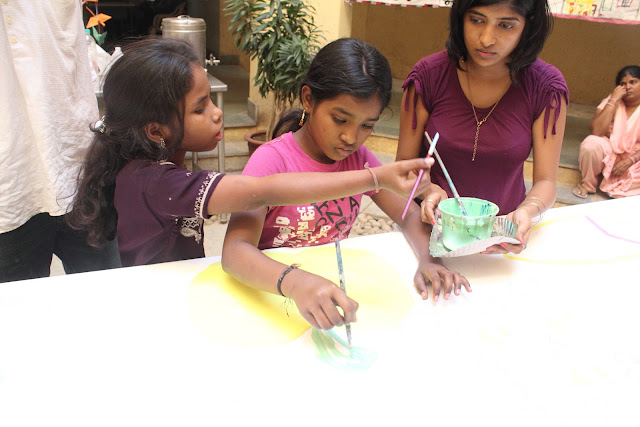 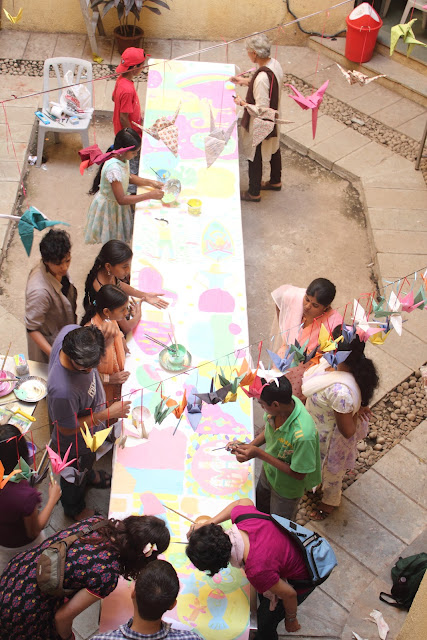 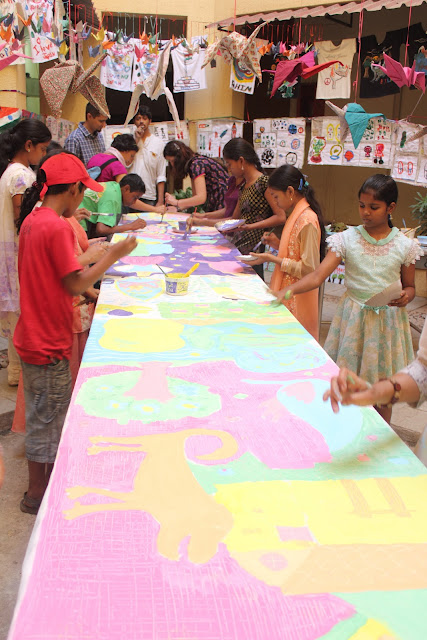 The young designers were very patient with the children, started from scratch, so that they get the concept, by first making them draw basics in their own sketch books and then tracing it on tracing paper, before collectively transferring their drawings to a larger canvas.
Then the mammoth task of painting this piece began, and for me it was to see if they had actually learnt the lesson of patience after the canopy making activity which had completely bored them. There were moments when the kids were walking away when they could not see any progress, but came back the moment a new task was added to them.
At the end, very painlessly and meticulously, with the help and guidance of our expert wall painters, a really happy and spontaneous piece was completed in about 6 hours. 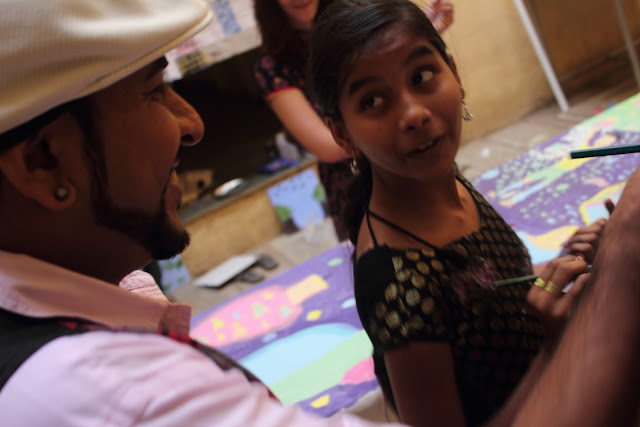 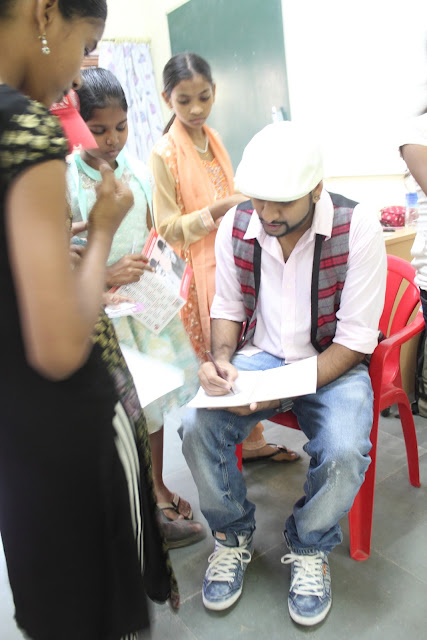 The highlight of the day though was them meeting Mad Rob! Rob is the TV host of an art & craft programme on a television channel. Since the day the children have been in Mumbai, I was noticing that they were a little glamour struck.  One of the girls aspires to be an actress and is pretty serious, so, I thought it would be better if I can manage to bring in a TV or Bollywood person to meet with them, to hear directly from them that even the field of acting & television requires hard work and education.
Through my network in Mumbai, it wasn’t difficult for friends to try and find out if we could invite a star but whoever we knew seemed busy, then Rob came into my mind, as being from the same design fraternity, I somehow knew that if he was free he would come. And he did!
It made their day! Actually they were so awestruck that they could not believe he was there, and kept staring at him from a distance. The girls were blushing and shy! 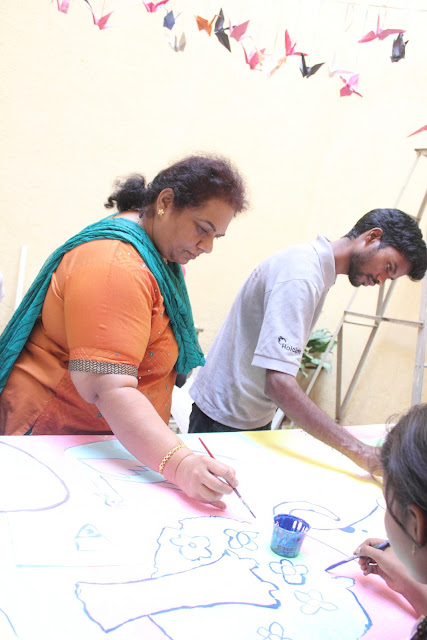 We had Rajashri Victor, the founder of VOICE come in for the day. She was amazed and happy to see the girls having done so well. She too tried her hand with a few brush strokes on the canvas.
The girls from VOICE had to leave by 6, and it was really difficult to say BYE to them, even for me. The same children, who had stared at each other with unfamiliar feelings 9 days back, were hugging, and crying and wishing each other the best, and promising to stay in touch.  It was a bit over whelming for me, but I kept my control.
With the promise to learn English properly and that they would remember all that they have learnt, we said bye to our family!
Earlier in the day before the last activity, I conducted a feedback session for the entire workshop. The children answered a set of 11 questions. I shall share them as their chronicles each day, starting from the 7th of March.
Posted by Juhi Pandey at 3/06/2012 08:32:00 pm

Juhi Pandey
An alumni of NID Ahmedabad - Textile Design (99-2002) and NIFT, Chennai - Fashion Design (96-99) I have17 years of work experience, starting in the mainstream garment export sector for almost 8 years, post which I moved on to working in the social development space. I have worked and facilitated various agencies in the area of fair-trade, skill development and education. I helped set up, Tara Trust, an organization for children and women in Goa between 2011-2015 concentrating on creative learning methods for wholistic development. I moved to Kachchh Gujarat in 2016, to work with a 10 year organization on a systematic growth plan for transforming the crafts sector through innovation and design into a creative craft industry for better linkages and promotion, with the key belief in entrepreneurship to be the main driver for development in the craft sector. My true passion is education, as I believes, it is the single most strongest tool for any meaningful change to happen in the society especially the for the less privileged or backward communities. When I am not working, I love theater and travel and hope to use these two tools in the future to educate the young minds of tomorrow.